The captain of the riverboat is a storyteller, and Captain Don Sanders will share the stories of his long association with the river – from discovery to a way of love and life. This is part of a long and continuous story.

All the gossip flying around the river on the “stern-line electronic telegraph” last Thursday was about the AMERICAN JAZZ, an overnight passenger “ship” owned by the American Cruise Line, which raced to the top of a sandbar and ran aground on the Cumberland River. The 190-passenger JAZZ, the last of the line’s many riverboats, was on a seven-night Music Cities cruise from Memphis to Nashville when the riverboat sank into the sand.

â€œAMERICAN JAZZ is currently assisted by a sandbar at Lake Barkley. The small riverboat suffered no damage and the guests and crew on board have been informed of the temporary delay, â€American Cruise Lines said in a press release.

Louisville Coast Guard officials said they were notified at 8 a.m. Thursday and the event occurred at 1:30 p.m. Wednesday.

At 4 p.m. EST on Thursday, July 8, 2021, JAZZ was stuck, as Captain Harry Louden often lamented, “tighter than the hind parts of a bull in flight time.” Cap’n Harry, however, was much more descriptive of the bull’s posterior anatomy than I dare mention on a page considered “second-grade friendly”.

The grounding of a ship on the river bedrock has tormented pilots and captains of river boats as long as arches have plied inland waterways. Before the first European intruders made their way through the Appalachians and â€œdiscoveredâ€ the rivers of the West, the boats of the indigenous peoples often got tangled at the bottom of the streams under their keels. Similar situations existed for flat wood-hulled boats, keelboats and steamboats. However, after the introduction of the first iron-hulled steamboat, the CLYDE, in 1870, strandings on sandy and muddy river bottoms lost much of their danger. With the acceptance of iron and steel hulls, losses attributed to groundings became more of an inconvenience than a deadly threat compared to the days when wooden hulls prevailed. 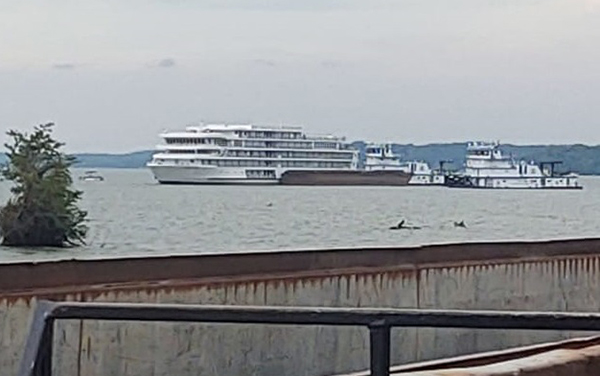 Running aground on a large passenger boat reminds me of a day aboard the DELTA QUEEN in the summer of 1965 as the QUEEN descended over Brandenburg, Kentucky. Earlier, while the QUEEN was making a stopover in Louisville, I went ashore to purchase a pair of comfortable shoes. I had always admired the Bass Moccasins, a shoe popular with young men in my college who usually came from further down in the Commonwealth. So when I got back to the steamboat I was carrying a pair that I vowed to try on before I started doing my night watchman rounds on the QUEEN.

It was still daylight outside my room as I began to prepare for the 10pm to 6am excursions around the bridges ‘tapping the clock’ with my partner, a venerable steamboat from renowned with more years on the river than I had ever been alive, Mr. Bruce Edgeton. As soon as I tied the last shoelace I stood up to see how snug the moccasins were and how comfortable they were. 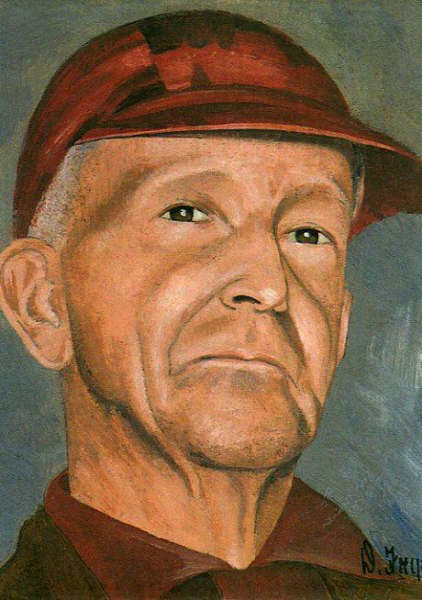 Immediately the deck under my feet in the new Bass shoes shifted side to side and front to back. As the room began to spin in circles, I hung onto the top bunk to avoid falling against the wooden partition. In a few moments, the movement ceased. The DELTA QUEEN felt strangely still as the ringing of engine room bells echoed from a deck below as the pilot suddenly called for different increments for the powerful steam engines driving the 44 ton impeller.

As quickly as possible I opened my cabin door and climbed onto the canvas-covered outside cabin deck where other crew members living on “Skid Row” were standing and wondering what was going on. .

Skid Row, located at the aft end of the cabin deck, the second level above the water, was located above the engine room where we, the residents, were treated to the sound of the bells of the Engine control telegraph, hissing steam, strained pistons and red churning rear wheel as pilot and captain Ernie Wagner demanded maximum steam gear to coax the DELTA QUEEN out of the hidden obstacle in front of the city â€‹â€‹of Brandenburg. Finally, the QUEEN poked her head out of the sand, straightened up and continued towards Kentucky Lake, again a few days away.

Although the new Bass loafers lasted for several years until they were finally discarded while I served in the Air Force, I will always remember the time I first tried them on to feel like how well they adapt.

On Thursday July 8, 2021 at 7 p.m., as I write this article and try to keep in touch with the local residents near the stranded riverboat, the AMERICAN JAZZ remains firmly attached to the bottom of the Cumberland, where, in as a local resident described, “it was a farmer’s cornfield” before the Barkley Dam flooded the river valley and created the lake named after Paducah’s favorite son, the Honorable Alben W. Barkley, the country’s 35th vice president who also served in both houses of the United States Congress. 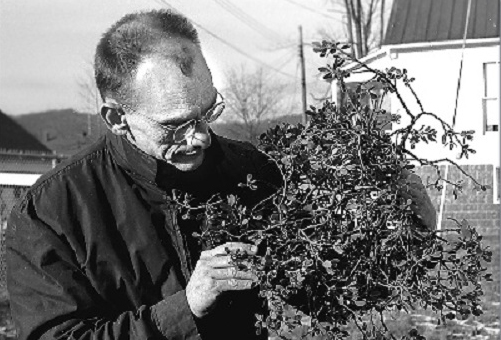 At the end of PA DENNY Sternwheeler’s first cruise season in the country’s bicentennial year 1976, the New Orleans Steamboat Company chartered the paddle steamer to organize bayous tours during their busy winter season in the crescent city. I was on board as one of the three boatmen. The fourth man was a reporter from Charleston, West “By God” Virginia, Adrian Gwin, an editor for the Charleston DAILY MAIL. Of course, Adrian was there for the story. Yet he also cooked, took care of the back kitchen chores, and regaled everyone with his many lively and entertaining tales of his hectic life.

The closer the DENNY got to New Orleans, the faster we wanted to get there, especially since the trip, which was only during the day, had lasted almost two weeks. So above White Castle, Louisiana and Point Clair, Bayou Goula Towhead, a fairly large island where I had seen ships cruising the point in high water instead of around the 180 degree turn, seemed a probable shortcut to save both time and distance.

While behind the controls, I lowered the paddlewheel and slowed the DENNY to a step while keeping an easy distance from the tow head. About a third of the way through the Inside Channel, the DENNY suddenly came to a stop and got stuck in the sand around the time the late fall sun was setting. A quarter of an hour later, after Adrian called the crew for supper, I left the paddle wheel running as we gathered for the evening meal inside the cabin on the Main Bridge. As we ate, I continued to stare at a light on the distant shore near White Castle. Before the meal was half over, I shouted that I had seen the light move. Immediately we all jumped off the dinner table and ran to the cockpit.

Now that the DENNY was underway as the paddlewheel washed the sand under her hull, it only took another 30 minutes, or so, before the paddle steamer was afloat. Then, as one of the crew sounded the water in front of the bow, we slowly paddled through the deep water, tied up for the night, and got off in time for Adrian’s special dessert. 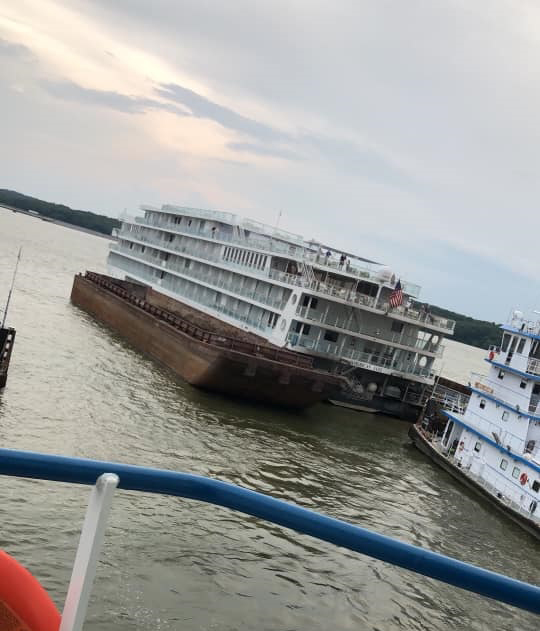 Captain Ted, the senior representative of the New Orleans Steamboat Company, asked reporter Gwin to keep this segment out of the story he was writing for the newspaper. He was worried, he said, that since the DENNY had run aground, the Coast Guard might ask his company to dry-dock the boat to inspect the hull plates. I was especially happy that I did not have to take responsibility for such an expense.

At this time, 8:30 p.m. Thursday, July 08, 2021, the internet has gone silent regarding the AMERICAN JAZZ grounding. I’m sure the sudden tranquility is the result of the pervading darkness of nightfall, a fact soon confirmed by a seaman on the spot who added via the aft line electronic telegraph:

Now my story needs to end, but the grounding event will always happen after my weekly deadline. According to Madison Berry, my river source in Paducah, Ky., The JAZZ has “122 passengers and 60 men and women crew on board.” Additionally, another source reported: “The vessel is 400 feet inside the red buoy line in shallow water.”

Last I heard, three tugs are on site, along with Coasties and local rescue units. Everyone involved in the extrication will do their utmost to safely free JAZZ and everyone on board from where they are firmly in the grip of the Cumberland River.

Our expectations and prayers go out to everyone involved, both aboard the AMERICAN JAZZ and those who stand by their side to help them. Hopefully by the time this column is published all issues will have been adequately addressed and the memory is just an interesting footnote in the history of the river.

Captain Don Sanders is a river man. He has been a riverboat captain with the Delta Queen Steamboat Company and with Rising Star Casino. He learned to fly an airplane before learning to operate a “machine” and becoming a captain in the USAF. He is an adventurer, a historian and a storyteller. Now he is a columnist for the NKyTribune and will share his stories of growing up in Covington and his stories from the river. Hang on for the ride – the river has never looked so good.

(EDITOR’S UPDATE: After more than 50 hours, the 120 passengers and some crew members of the American Jazz were removed from the ship and transported to Nashville by bus. No injuries were reported. boat got stuck on the sandbar on Saturday night; work continued to free the ship.)