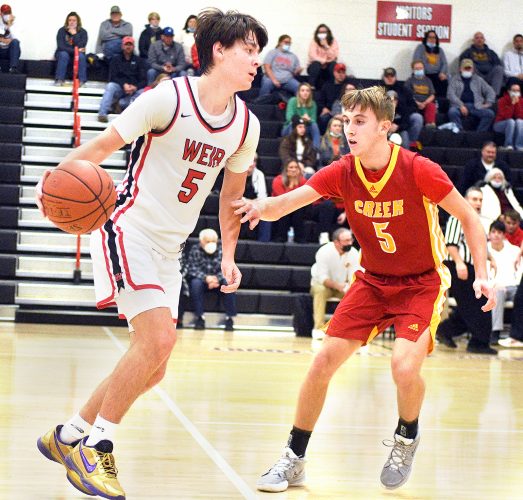 WEIRTON – Basketball is a running game, and the boys at Weir have run more races than Indian Creek.

The Red Riders built a double-digit advantage in the second quarter, and they were able to withstand several charges from the Redskins en route to a 64-52 victory Tuesday night over Ron “Fritz” Williams Court inside the Carl Hamill Fieldhouse.

“Our guys got together for the first time”, Weir’s head coach (3-4) said Anthony Santangelo. ” They got together. They were able to feel the game and feel each other.

Weir High built an 11-point lead in the second quarter, and Creek never came closer than three points the rest of the way.

“We just weren’t really fundamental”, Indian Creek head coach (4-5) said Joe Dunlevy. â€œWe did not box. Last Thursday, we played with passion, we boxed and we were able to recover some rebounds. They killed us on the boards tonight.

The first quarter was played at a steady pace, and a start from the winners gave them a 21-14 lead late in the quarter.

“We are okay with that” Dunlevy talked about playing on the beat. â€œWe just weren’t fundamental tonight. It comes back to me.

Weir continued to shoot the ball well in the second stanza as the Boys in White took a 26-17 lead, forcing Dunlevy to request a time-out.

The time out proved to be a success as the Redskins fought to get back into the game. The Redskins had a 10-2 push to come in three points at 29-26. Indian Creek had a golden opportunity to get even closer, however, a missed layup kept their deficit to three, and the Redskins never got to get any closer.

After the Redskins’ run, the Red Riders regrouped and posted a 10-3 run to take a 39-29 halftime lead.

“You know what you will get every time you play them” Santangelo said. â€œThey are always aggressive; they always have the will to win and they follow the leader. It was a battle. It’s always a battle when playing Indian Creek. I have huge respect for Coach Dunlevy.

Weir hit first through third to come up from 12, but once again Indian Creek hit back. The Redskins didn’t come away quietly as they drew closer to 47-42, however, the Red Riders again had the answer as they responded with another push to take a 51-41 lead in the fourth.

“They keep coming” Santangelo said. â€œThey continue to drive the painting. They have a big one on the opposite block. We have a good defensive helper. Our Aid Defense understood what they were doing. Our aid defense allowed us to make a few stops.

The Red Riders extended their lead in the fourth as the home side took a 64-47 advantage.

“Our defense made the difference” Santangelo said. â€œIt all started with our defense. We were able to get second chance points. We shared the ball well. Plus, everyone played energetically, whether it was the five guys in the game or the kids coming off the bench. “

“This game was exactly the same” Dunlevy said. â€œI have to do a better job training to prepare our children. Last Thursday I thought our rebound issues were resolved. We did not box. It’s my fault. I haven’t prepared them enough.

Indian Creek is set to play Harrison Central on Friday night on the road. The JV match is scheduled to start at 6 p.m. The Huskies defeated the Redskins, 59-58, Nov. 30 at Indian Creek.

Weir is set to play Burgettstown at 5 p.m. on the road on Saturday in a girls-boys doubles match. The girls will play at 3 p.m.

The latest news of the day and more in your inbox