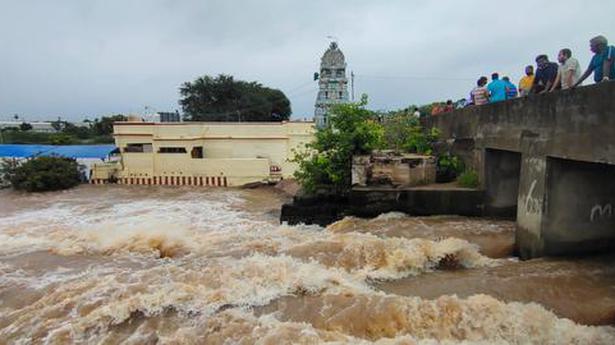 The movement aims to ease the pressure on the Cauvery River; people along the shores of Kollidam were urged to move to safer places

The Department of Public Works (PWD) has decided to divert around 10,000 cusecs of water into the Kollidam River from upper Anicut (Mukkombu) from Monday evening.

This decision comes because of the large inflows into the Koraiyar and Kudamuritti rivers, which flow into the Cauvery river near Tiruchi.

The Koraiyar was receiving large influxes following widespread rains in and around Keeranur / Viralimalai in Pudukottai district and Manapparai in Tiruchi district in recent days. A few reservoirs in the Keeranur / Viralimalai areas had excess inflows. According to PWD sources, around 2,500 to 3,000 cusecs of water flowed through Puthur Weir near Tiruchi, which empties into the Cauvery.

“About 10,000 cusecs of water will be diverted to Kollidam from Mukkombu from 6 p.m. Monday,” said collector S. Sivarasu, highlighting the large influxes in Koraiyar and Kudamuritti as well as the expected flow in the Cauvery, as the dam de Mettur is fast. reached its full capacity due to the large influx of dams from Karnataka.

Mr Sivarasu called on people living along the shores and dhobies of Kollidam to move to safer places. People have been advised against bathing, swimming or fishing in the Cauvery River. He also cautioned people against taking selfies near waterways.

In an emergency, people can contact the authorities by dialing the free number 1077 or by SMS to 9384056213 or via the TN SMART mobile application.